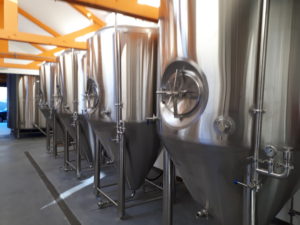 WHEN it comes to advice on setting up a pub, with attached brewing facility, most roads lead to York, where brewing and pub consultant, David Smith, calls home.

It was to Smith – and others, including nearby Heriot-Watt University, which boasts a department of brewing and distilling – where Alistair Brown, now CEO of Edinburgh-based Bellfield Brewery – turned, when he was gripped by a desire to find a decent pint that didn’t spark rather horrible symptoms.

Diagnosed with celiac disease six years ago, he says “it became personal” – his ambition to brew a gluten-free beer that at least matched his previous favourite tipple, the locally-brewed IPA, Deuchars.

It has been a steady haul, producing a beer (you would call it a ‘craft beer’) that has always been about flavour first and medicinal qualities second.

It helps that he was previously involved in large projects – immediately before turning his hand to full-time brewing, he was, for ten years, chief technology officer at broadcasters, STV – so he wasn’t daunted by the prospect of having to be methodical or pulling together a team.

The result is a brewery named after the Bellfield area of Edinburgh’s coastal town of Portobello, which would be best described as a ‘micro-brewery’, by virtue of the volume it now produces.

It’s as much a science as an art – brewing – involving an understanding of, among other things, fermentation, sugars, proteins and grains. For the relatively uninitiated, it helps to at least know the difference between a keg and a cask.

Begins Smith: “A certain amount of technical knowledge is required, especially if the ambition is a flavour that has some commercial potential, which will be of a higher quality than the average home brew. It’s easy enough to learn, I’d say.

But he cautions: “The first question for any prospective brewery is how much beer does it want to produce? And for a community pub, of possibly just neighbours, it might not be that much. So you first need a business plan. My experience is that many people start small and soon realise they want to do more, but then don’t have the space to do it.”

He continues: “Community-run breweries risk falling apart early on in their development, because they have not quite sorted out what they are, and who for, and who is going to do what job and for what, if any, pay. So, you need to establish ground rules: are you aiming to develop a commercial operation, is anyone expecting a salary, or is it essentially home brewing by a club of enthusiasts, essentially on a table-top?”

So long as there is a sufficient supply of water and power (plus a means of disposing effluent), the brewing kit required can be as small as 3m x 3m. Bellfield’s is a good deal larger, comprising over half a dozen, 2,000-litre shiny stainless steel tanks and associated piping.

For Bellfield Brewery, the market was always going to be bigger than the bar (or taproom) attached to the brewing room, since it is estimated that one in a hundred people have celiac disease.

With some personal savings, plus some cash provided by the mother (who became a formal business partner) of a friend of his daughter, Brown embarked on perfecting a recipe, which – inevitably – involved a lot of trial and error.

Some later financing came through a crowdfunding campaign.

At the time, Brown was still at STV, meaning most evenings and weekends being devoted in pursuit of his perfect pint.

“We did some of our own recipe work – essentially home-brewing – with a friend, who is a local hobbyist brewer, and then a year-long research project with Heriot-Watt University.

“After about 18 months, we were happy and launched our IPA and Pilsner recipes in 2016. We were fortunate that we quickly gained some decent distribution, on the back of our story and also winning awards in – important for me – mainstream categories.”

The truth is that – depending on the grains used – many beers might be gluten-free, but they might not be and are not routinely tested to prove they are, as Bellfield’s output is. 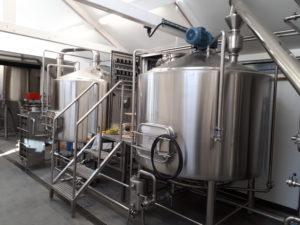 You can imagine the time, but also the fun, involved in the research. “You need to be prepared to do quite a lot of homework. We spoke to a lot of folk and found the brewing community, in general, being really keen to offer advice and recommendations, which is how we heard about David Smith. David proved to be our guiding light.

“In terms of investment, of course there is bespoke – but also quite expensive – equipment available, but there is also quite a healthy second-hand market, as people quickly graduate from entry and intermediate-level brewing.”

Premises were found in Abbeyhill, continuing a long tradition of brewing in the area (the last of several former breweries said to have closed its doors in 1987).

Among the plans for the future is to instal a canning facility, the output currently having to be transported to dedicated providers of canning and bottling. To that end, a funding application is being put together for business competition, Scottish EDGE.

Continues Brown, negotiating the country’s business advice and funding ecology is an often inevitable part of the start-up journey, other ‘hoops’ including – not least if there is a commercial aspect – registering with HMRC (for permission to brew, package or hold beer) and acquiring environmental health, trading standards and other licences from the local authority.

Smith echoes the sentiment: “There is certainly ‘red tape’ involved, which is where our service can come in. We help breweries tick all the right boxes, make sure all the right licenses are in place. Alistair could give you chapter and verse on water supply and effluent discharge.

“There are quite a lot of things to think about. People often just think about the day they brew their first beer, but there is quite a lot of work required to get to that stage, even for quite a small brewery. But I go back to my initial point: the main thing is the commerciality, whether you charge for the beer, and that sort of thing.”

* Check out a BBC Radio 4 programme, The pub is dead! Long live the micro-pub!, here (perhaps for a limited period of time), with an explanation, here.

* The Guardian newspaper, here and here.

This article is by Edinburgh-based journalist Mike Wilson.